Russian lawyer was beaten by the police, initiated two criminal cases and was arrested for 2 months. The Case of Michael Benyash 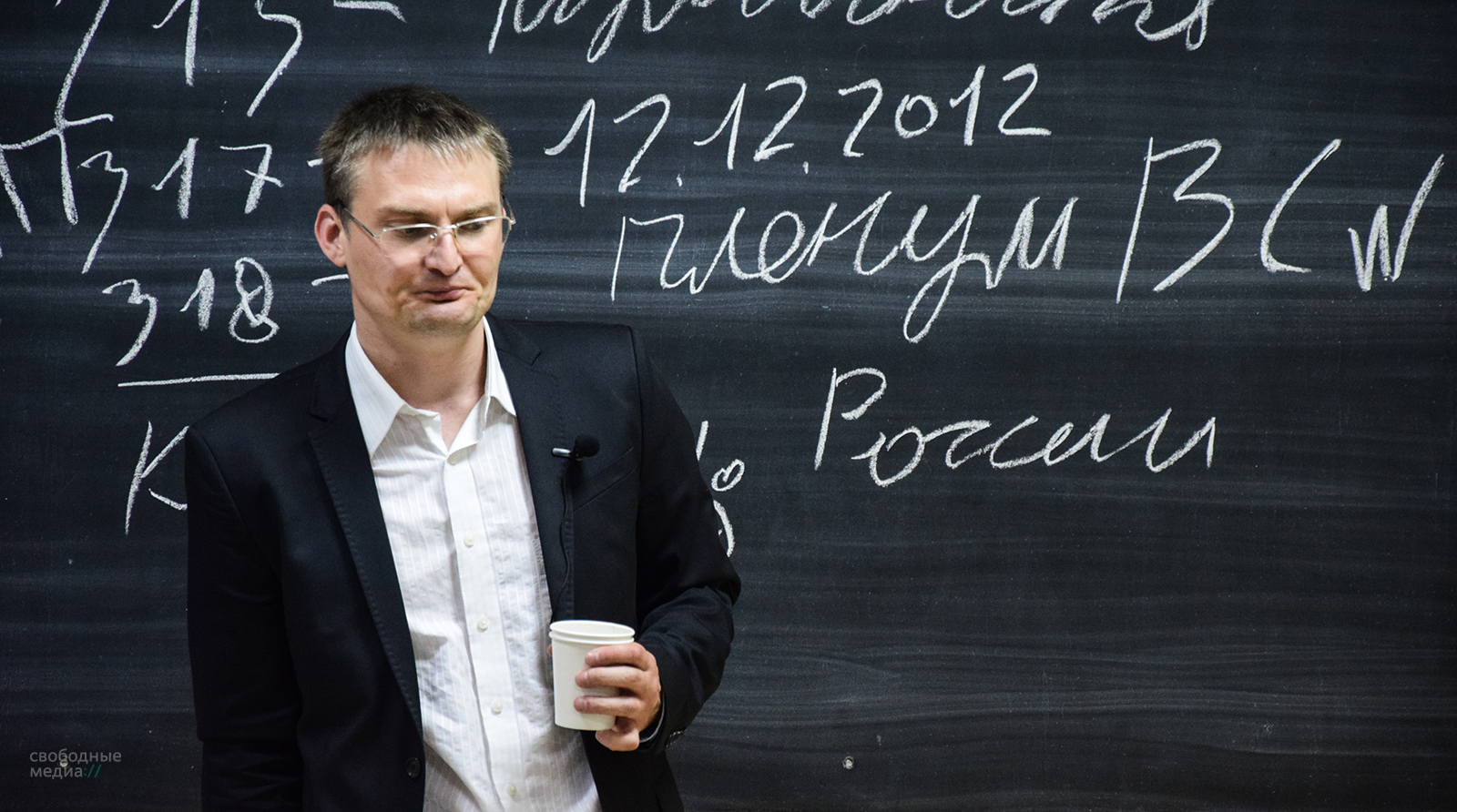 On September 9 in Krasnodar before the peaceful protest against the pension reform was detained Russian lawyer Michael Benyash, who arrived in the city to protect the protesters in court.

The police force pushed him into a car and beaten, then the court arrested him for 14 days. Immediately after his release from jail, the lawyer was accused of two criminal cases, Krasnodar court has placed him in a detention center for 2 months. 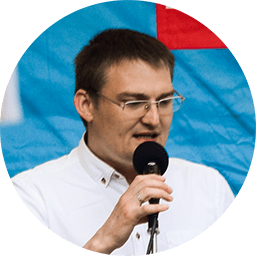 Michael is 41 years old, he began to be a lawyer in 2006, he started to work in the courts since 2003. In his practice, there are cases in courts of Russia and the European court of human rights. Lawyer argues that the case ‘Vlasov and Benyash vs. Russia’ in ECHR has completely changed the judicial practice in Russian courts.

In 2017 Benyash proceeded to the protection of 158 victims in the case of the cottage settlement ‘Pushkin dol’ in Gelendzhik (Krasnodar region). Later, he joined the protection of apartment buyers of unfinished house in Gelendzhik. The lawyer repeatedly told that the owners of land and housing was deceived by the administration of Gelendzhik and ex-mayor Victor Khrestin.

In 2018 Michael Benyash took part in anti-corruption investigation by team of opposition leader Navalny of Khrestin property and his family. The lawyer told that administration deceived the inhabitants of Gelendzhik, and the government suppressed people who chose to protest.

The last two years and a half, russian lawyer Benyash defended political activists in courts and prepared the cases to consideration in the European court of human rights.

Michael Benyash arrived to Krasnodar to protect detainees who protested against the pension reform on the rally which was held on 9 September in the centre of the city. By this time, before the rally, local political activists had already been detained. Benyash, due to the massive use of preventive detention, issued statements to the investigative Committee and the Prosecutor’s office.

After the lawyer left the building and walked a few hundred meters away, two police officers in civilian clothes grabbed him and put in the car. Together with the lawyer was his client Irina Barkhatova, who took video of the moment of detention. Later Barkhatova clarified that the police didn’t give her to take video, and policemen tried to take her phone. Due to recording officer put her in the car, and then took them both to the Krasnodar police department of Central district.

Further Benyash would tell that during the trip one of the officers in the rear seat attacked him while trying to pick up the phone. Dmitri Yurchenko, the police officer, choked him, wringing his hands and trying to squeeze his eyes. The car was driven by second officer — Egor Dolgov.

Behind the gates of the police department there was the real torture. Handcuffed lawyer thrown from the car face down on the road and raised to the office of criminal investigation. Inside Dmitri Yurchenko repeatedly punched Benyash in the face and threw him against a metal safe.

Previously there was a torture in this police department. Several victims told Free Media that police used violence against the participants of a peaceful protest. Investigation of crimes police have not moved from a dead point.

The reason of detention of Michael Benyash became posts on Facebook with a call to come to the protest against pension reform. Police made record under article 20.2 of the administrative code ‘Violation of the established procedure of organizing or holding rallies, protests, demonstrations, marches or picketing’.

In addition, police officer Egor Dolgov wrote that on the police office parking Michael Benyash began to cause bodily harm to himself, bang his head on the car and that he tried to leave the police department. For that the lawyer got another record — under article 19.3 of the administrative code ‘Disobedience to the lawful order of a police officer’.

As a result of being hit in the face by a police officer, Michael Benyash was diagnosed with a traumatic otitis and numerous bruises. Without medical care his ear stopped to hear.

The next day after the arrest, September 10, was assigned two court sessions in the Leninsky district court of Krasnodar. The session was supposed to start in the morning, but started only late in the evening when courthouse was already closed. The secretary of judicial session on this day was trying to get out listeners from the courthouse, not allowing them into the hall.

Behind closed doors in the presence of 9 lawyers who responded to help a colleague, Michael Benyash was sentenced to 14 days in jail and 40 hours of labor.

Judge Stanislav Burenko did not grant any motions by the defense: the questioning of the witness Irina Barkhatova, the inclusion of videos or for admission of the documents proving the innocence of lawyer. Listeners noted that the secretary of judicial was in a state of alcoholic intoxication. A motion to dismiss the secretary was not considered. 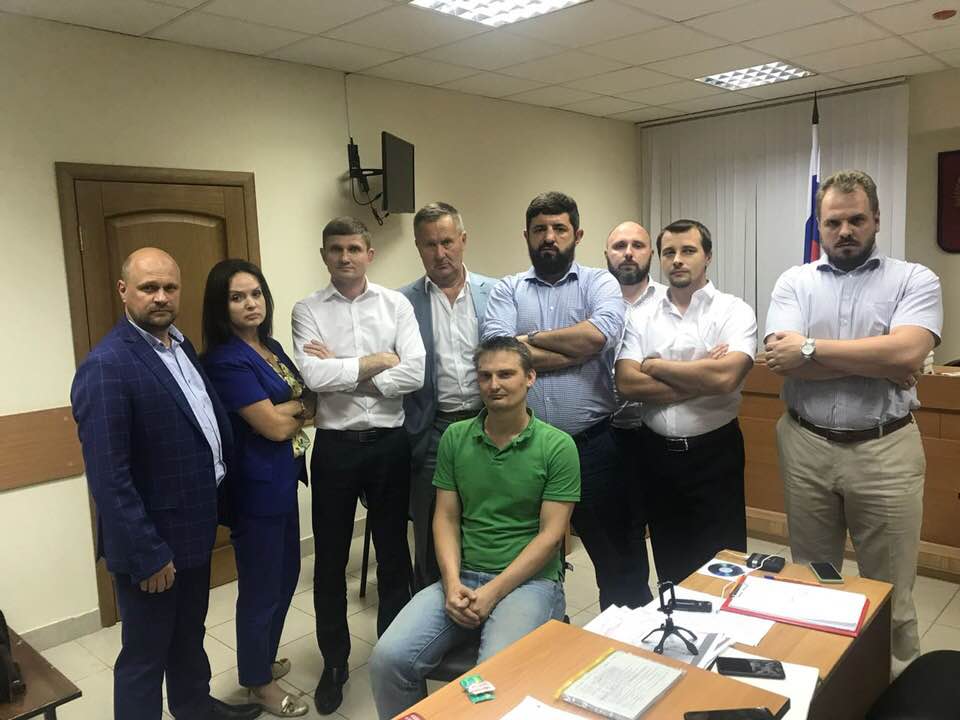 Michael Benyash and the lawyers who defended him in the Leninsky district court. Photo: Aleksey Avanesyan

Appeals of administrative cases were considered in the Krasnodar regional court. In the second instance, both judgments upheld. Judge Yuri Onokhov in the presence of a dozen lawyers and the same number of listeners did not even listen to the motions of the defense. All motions to dismiss were also rejected.

6 hours before the Benyash was released from jail in the detention center of Ust-Labinsk, the investigator came to the lawyer to carry out some ‘investigative measures’. Immediately after the release Michael Benyash was detained again. He was accused of violating article 318 of the criminal code of Russian Federation ‘Application of violence not dangerous for life or health, or threat of use of violence against a representative of authorities’.

Dmitri Yurchenko, who punched the lawyer in the car and the police office, wrote a statement that during the arrest Benyash bit his finger. For this reason, the lawyer was taken to a detention center again for 48 hours.

In Leninsky district court of Krasnodar judge Diana Belyak chose form of detention for 2 months, in agreement with the investigator and the prosecutor, who said that if Michael Benyash is set free, he will destroy evidence, exert pressure on witnesses and the investigating authorities, or generally leave outside Russia. The court did not take into consideration that Benyash had two-month old son, his wife on surgery and the positive response. Lawyer Alex Avanesyan requested that it would be a pledge in amount of 100,000 rubles, or house arrest, but it was not granted. 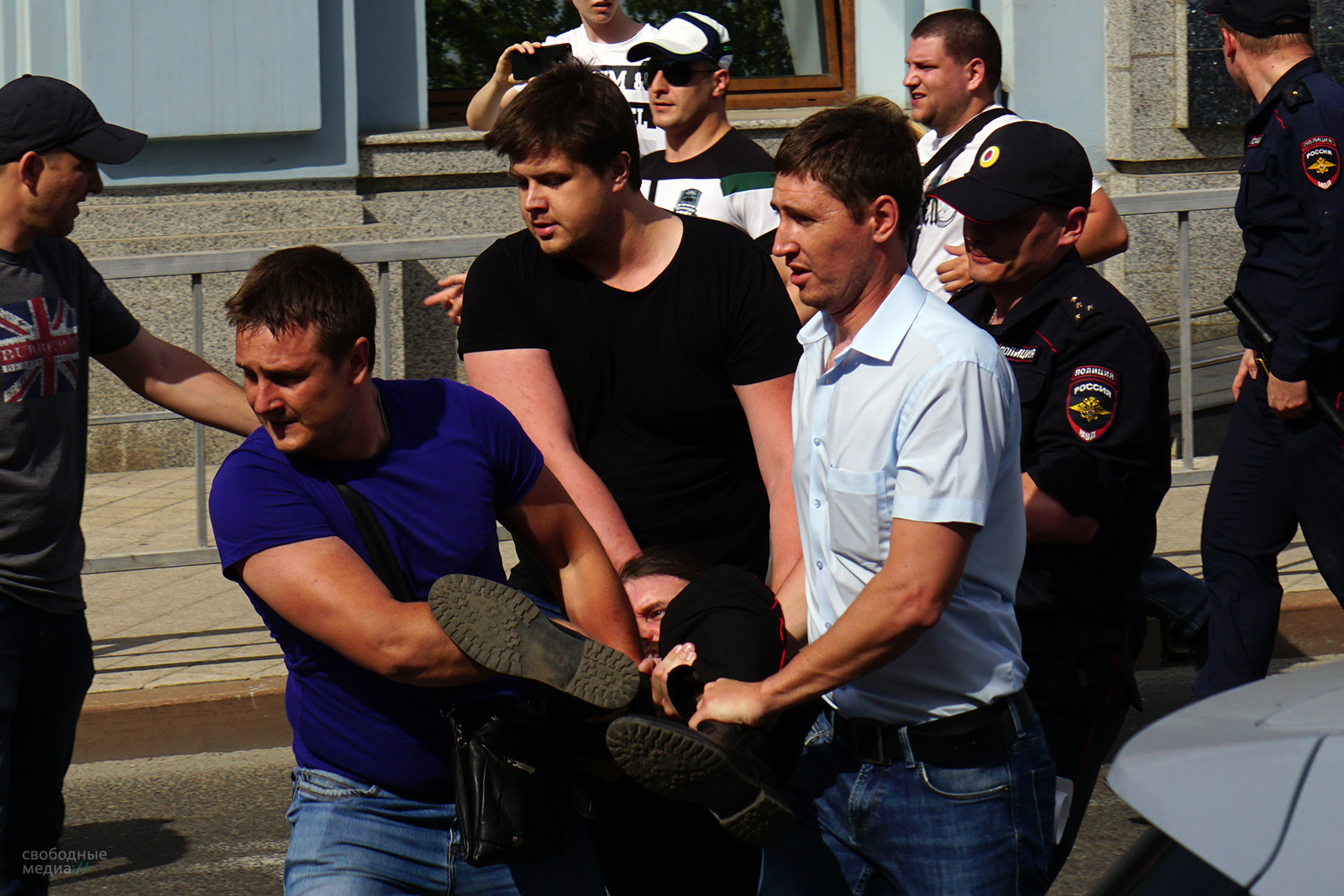 Employees of criminal investigation department Egor Dolgov and Dmitri Yurchenko (in blue and black t-shirt) on the suppression of the protest action ‘He is not a Tsar’ in Krasnodar. Photo: Free Media

At the session Benyash made the last word: ‘Two months ago my son was born. Now, he needs me. He needs a father who brings the money at home and watch the house and the son. You took away a father from the son. Indifferent, calm, brutally. Possibly in revenge. It didn’t ring any bell in your chest that it is all meanness and baseness, but you are familiar with it. You hurt me and my family. But that’s not the problem. Scaring did not work and never will. I just became to despise you even more. As people with an atrophied conscience. Me and my family got through this ordeal calmly and firmly, as were many others. But I believe that sooner or later will come a day when Russia will be free, with independent courts, and where lawyers will be respected’.

Later it became known about one more criminal case concerning Michael Benyash. He was accused of obstruction of justice under article 294 of the criminal code. According to investigators, at one of the sessions, Benyash ‘Repeatedly interrupted, broke orders, made demands and objections against the decisions of the judge, he made comments and violated the established order of the session’.

Audio recording of the court session, about which it was conducted, was published by Free Media. The incident took place in the Pervomaisky district court of Krasnodar on May 6, the day after the protest action ‘He is not a Tsar’ in Krasnodar. Lawyer Michael Benyash represented one of the detainees at the protest, and he asked to allow listeners to court session. At this time they were not even allowed in the courthouse.

After that, the judge ordered to remove Benyash from the session. ‘I refused to leave, then I was picked up and threw into the corridor. When I tried to return to the hall, I was again lifted into the air and kicked in the lobby. I was thrown backwards. I hit a metal detector, which fell on my foot and damaged it’, — said Benyash to ‘Novaya Gazeta’.

At the moment, criminal proceedings are not united, they are investigating by different investigators. Lawyers continue to defend the freedom of Michael Benyash in the courts. 18 lawyers represent interest of Benyash.

Immediately after the arrest of Michael Benyash 379 lawyers from across the Russia have signed an appeal to the Federal chamber of lawyers. Professional lawyers have considered the attack on a colleague ‘impudent invective on the lawyer corporation’. The President of the FCL Yury Pilipenko disagreed with the legality of the investigative actions in relation to Michael Benyash, that he was involved in criminal cases of violence against representatives of the authorities and obstruction of justice.

Amnesty international recognized Michael Benyash a prisoner of conscience. ‘The violent dispersal of protests against raising the retirement age was accompanied by mass human rights violations across the country. In such situation, affected by the actions of the authorities the lawyer services are even more important. In this context, one of the egregious cases was the detention and subsequent arrest of the Krasnodar lawyer Michael Benyash. We demand his immediate release and effective investigation into his statements of beating by police’, said director of Moscow representative office Amnesty International Natalia Zvyagina.

The minister of Internal Affairs Vladimir Kolokoltsev was notified about the events. At a personal meeting with the President of the FCL Yury Pilipenko, the question was raised on the situation of lawyer Michael Benyash. The President of FCL told Minister about the actual information on non-compliance with the requirements of the law during the arrest of a lawyer by the police, and also about possible illegal use of physical force. ‘Minister replied that he would consider this situation’, – said Yuri Pilipenko. 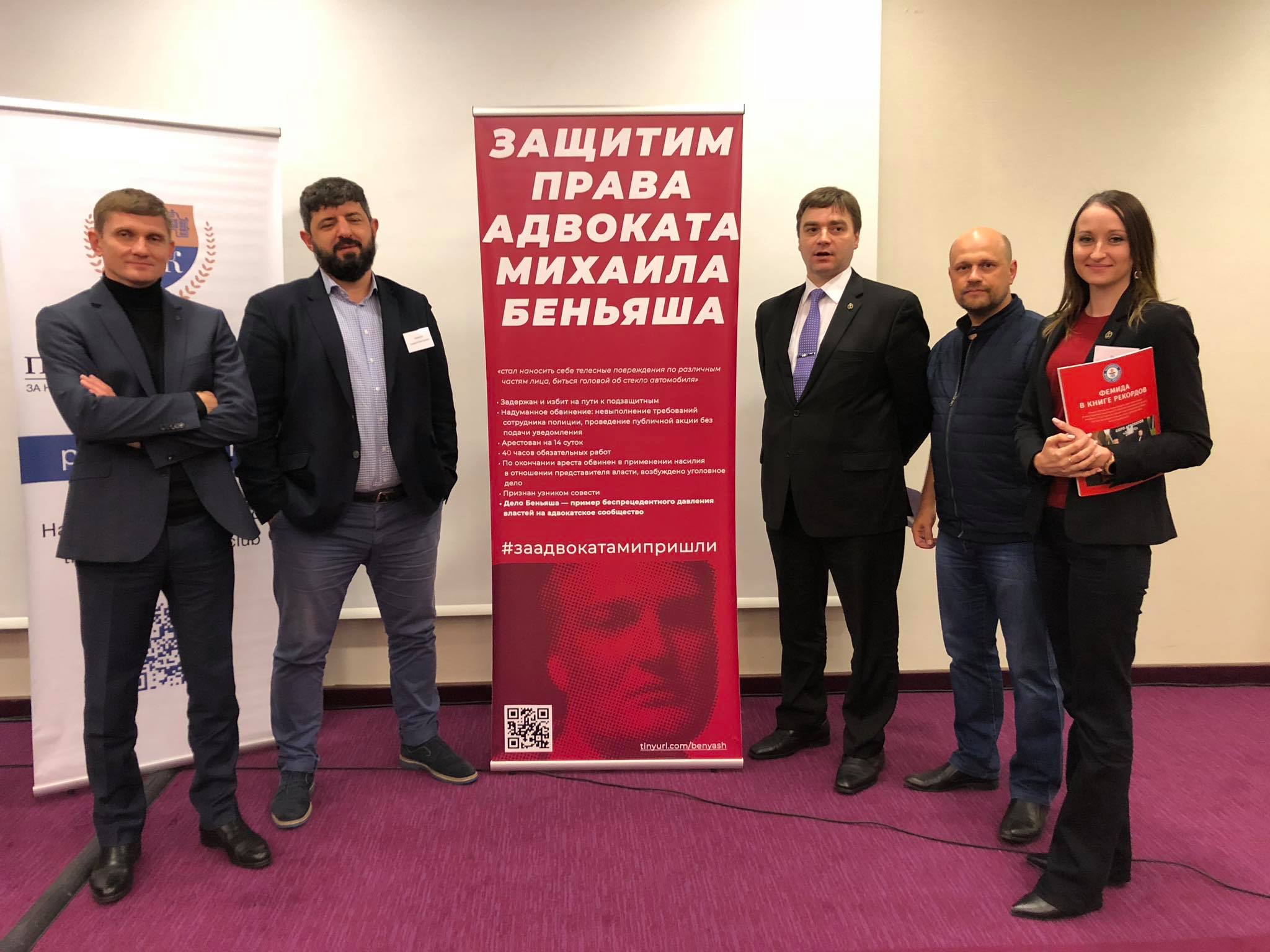 Discussion of the situation with lawyer reached the international level. On September 12 during the working session of the OSCE was discussed a situation with a lawyer. The report stated that a lawyer was beaten, and that Benyash was deprived of his right to a fair judition. The fate of the case of Michael Benyash was published in foreign press. Amnesty International worldwide requests to appeal to the Russian authorities a demand to immediately release the lawyer, the investigation about his beating, and the restoration of the rights of advocates in accordance with the requirements of the UN.